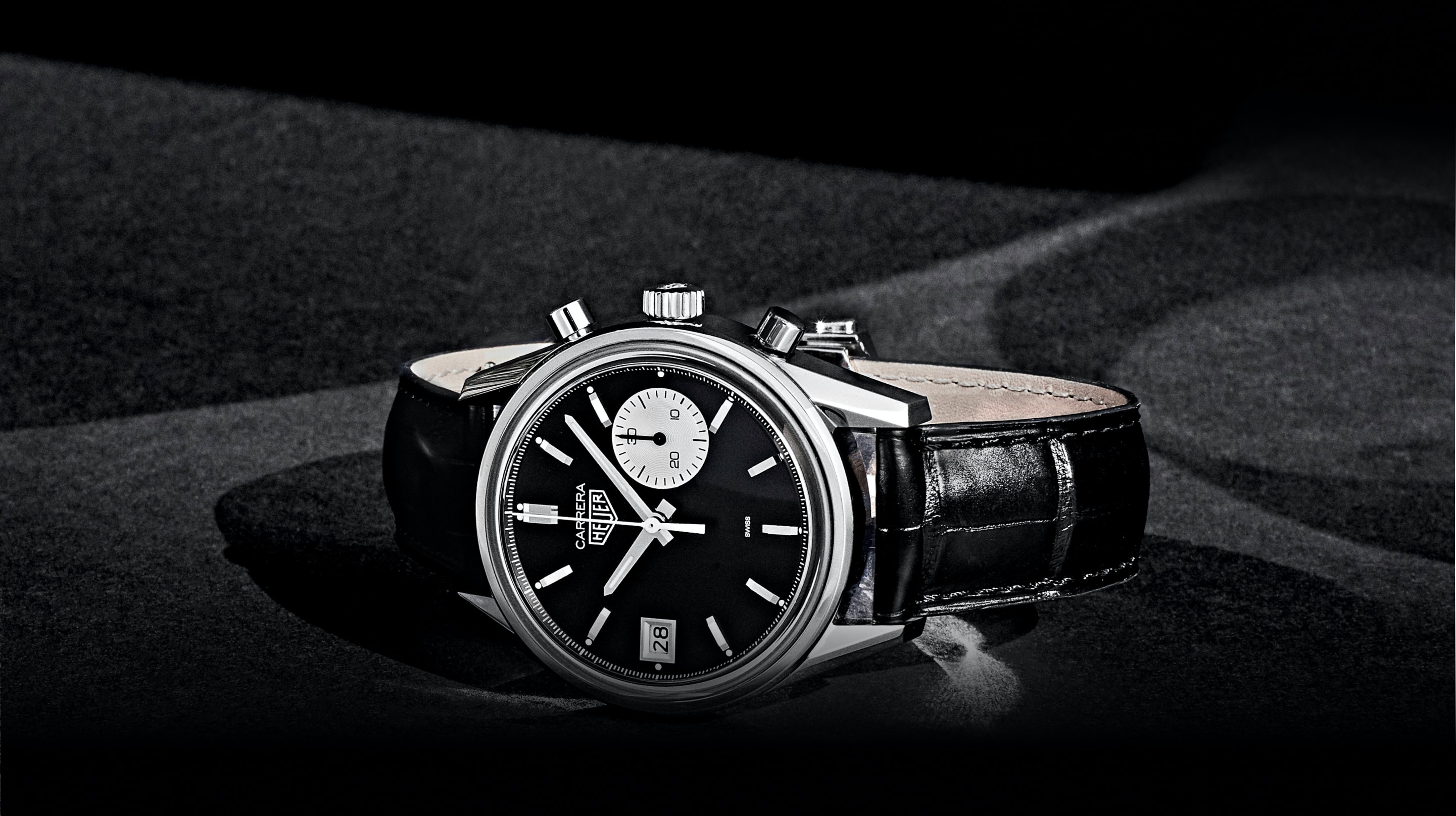 We’re back at it with TAG Heuer
Our new collaboration with the Swiss brand revives an all-time classic: Jack Heuer’s groundbreaking 1960s single sub-dial chronograph with date, the second-generation Carrera Dato ref. 3147N. A limited edition of 250 watches, the TAG Heuer Carrera Dato Limited Edition for HODINKEE features a reworked version of the brand’s premium in-house automatic Calibre Heuer 02 placed inside the vintage-inspired 39mm “glassbox” case. Here’s why we love it. 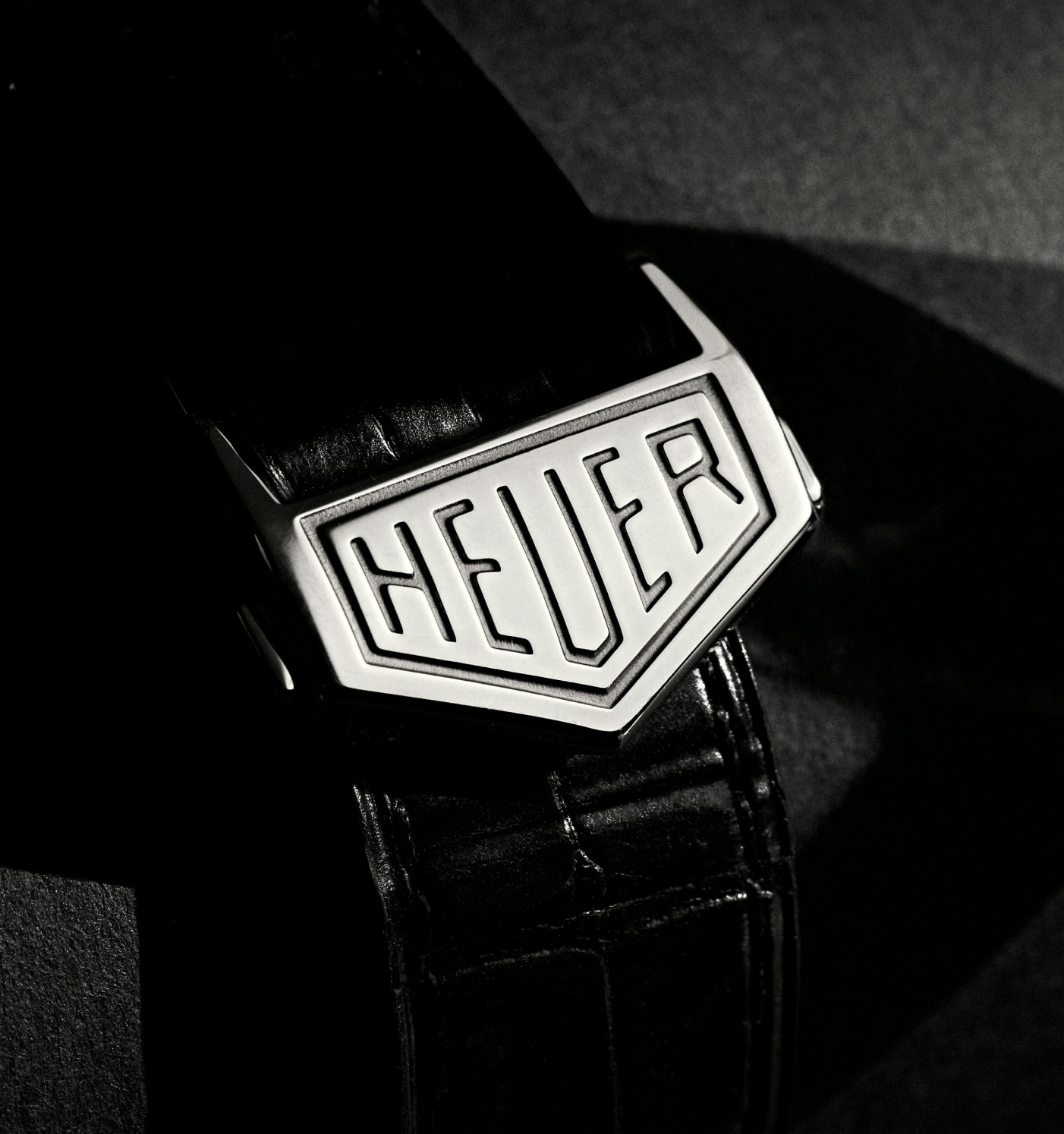 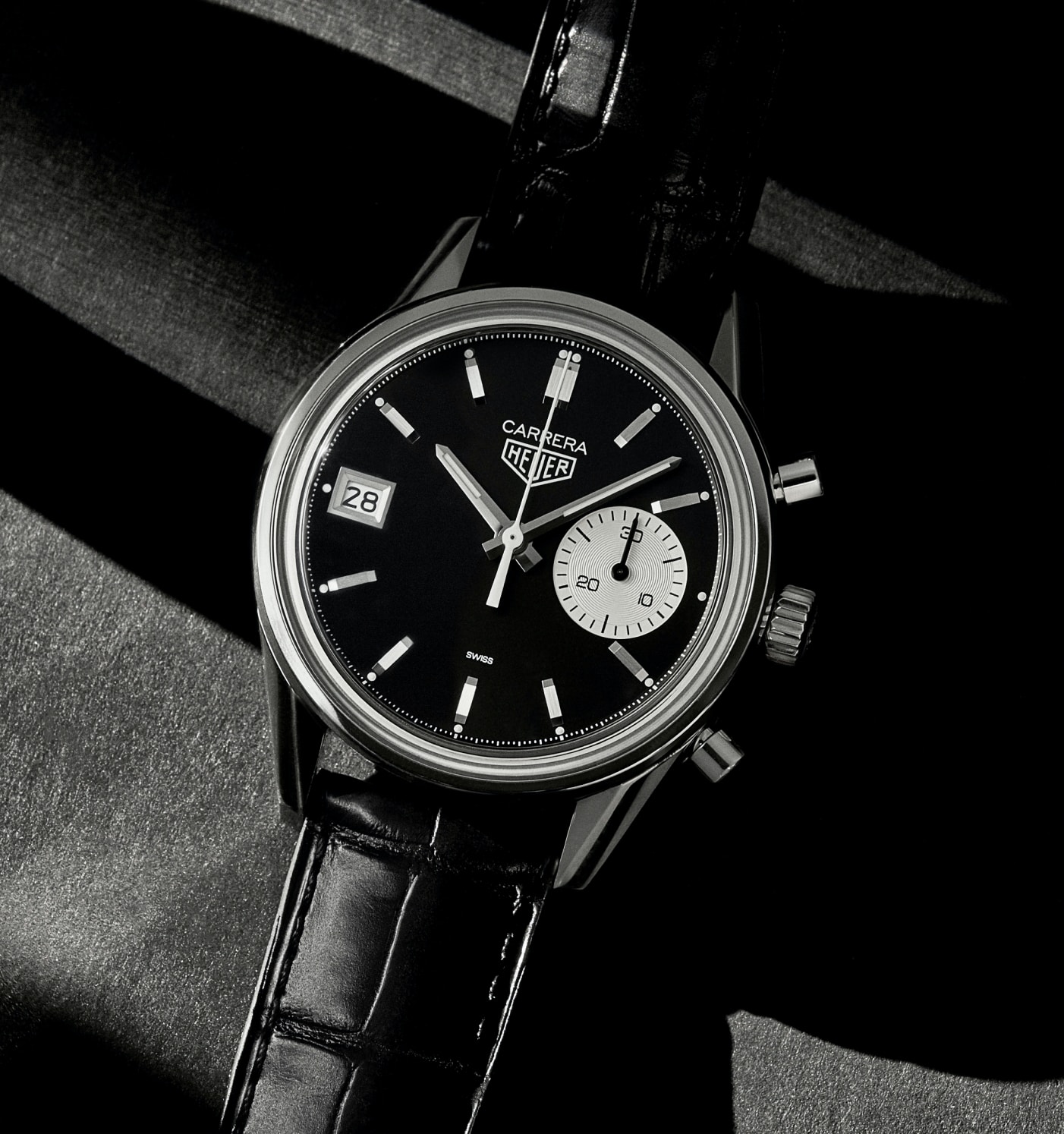 Jack Heuer was a horological hitmaker; a bootstrapper who guided his family firm to profitability after taking over in 1962, at the spry age of 30. The designs produced by Heuer during his first decade leading the brand are now considered some of the greatest triumphs in chronograph history. And if there’s one collection that best exemplifies Heuer’s approach to watchmaking, it’s the Carrera chronograph.

First released in 1963, the Carrera served as the building block for a new generation of Heuer wristwatches. Its quick success granted the company the financial footing for further experiments in design and engineering, and in 1965, Heuer followed with the inaugural Carrera with a date function. That watch was the ref. 3147; not only was it the first Carrera with a calendar complication, but it was also one of the first chronograph wristwatches to feature the now-standard rotating date wheel display. 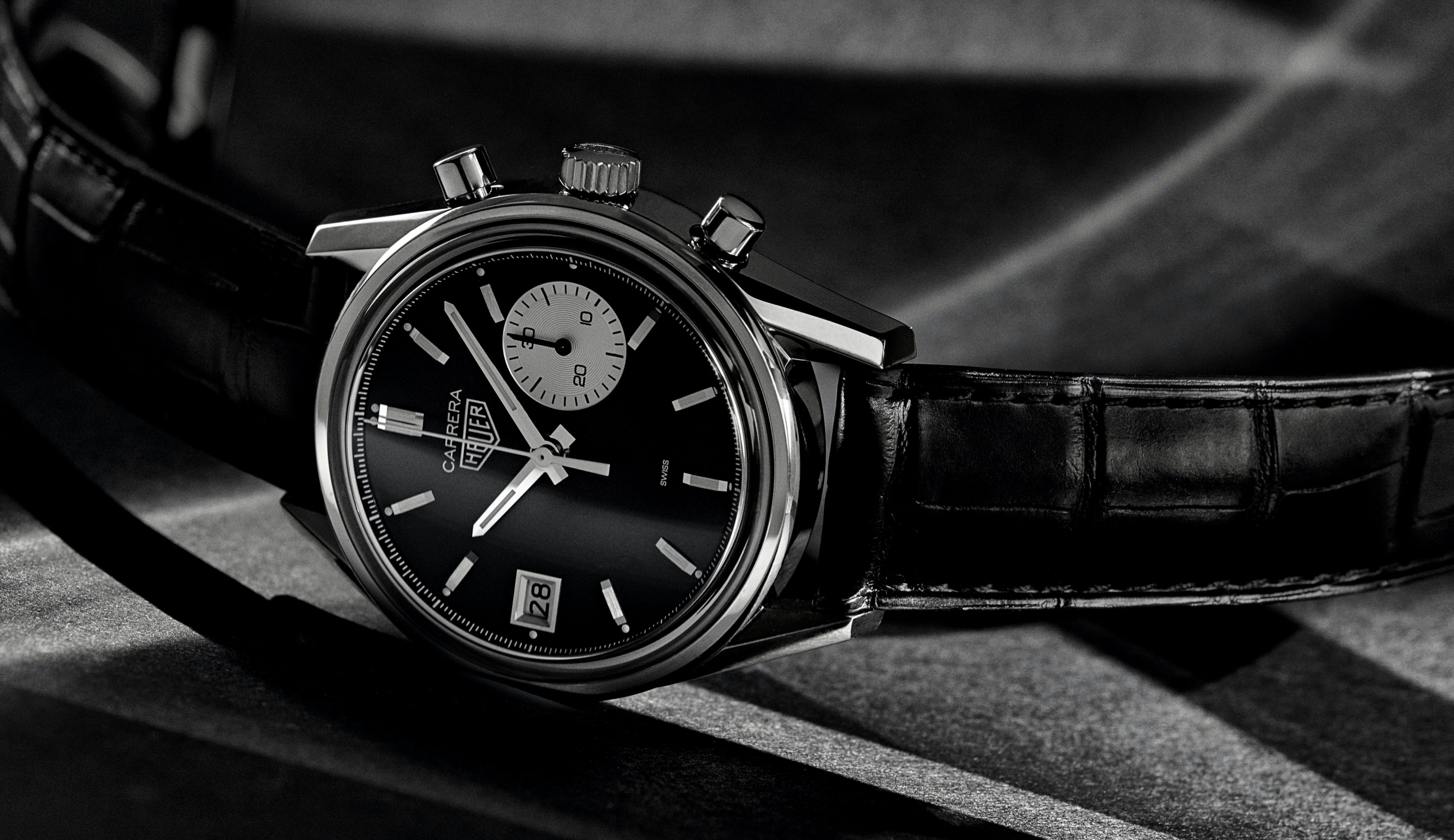 Nicknamed the “Dato 45” for its combination of an elapsed 45-minute register at three o’clock and a date display, this new-age chronograph featured the same clean and compact case profile of the conventional Carrera with a back-to-basics dial. You might recall this isn’t the first time we’ve drawn from the original Dato 45 for a collaborative limited edition with TAG Heuer: The 2017 Carrera Skipper Limited Edition for HODINKEE featured a nearly identical single sub-register orientation. In working with our colleagues at TAG Heuer again, we wanted to bring back the watch that helped inspire one of our favorite projects ever, in as authentic a manner as possible. 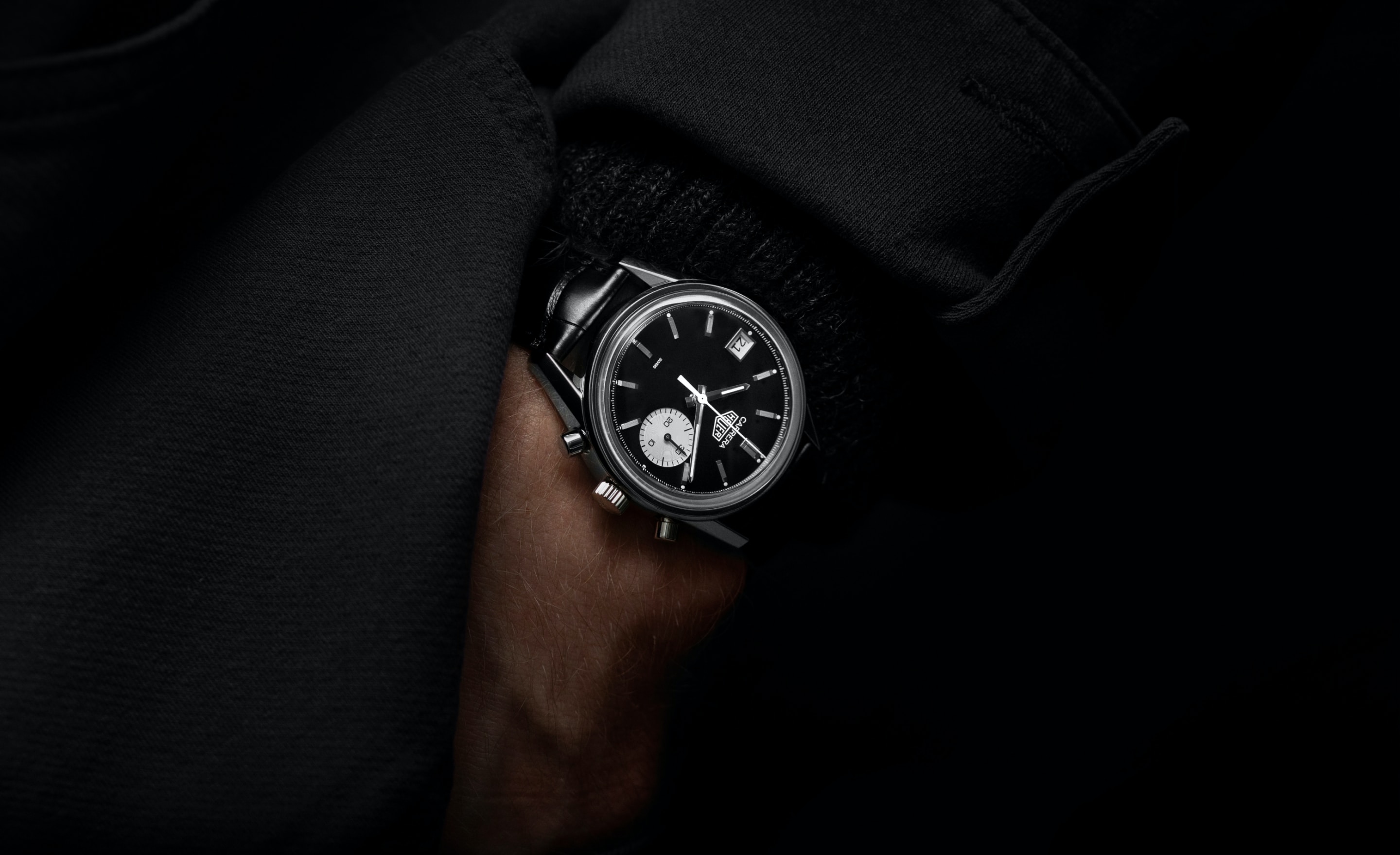 Fifty-six years later, we think the Dato’s rakish ’60s aesthetic remains just as charming as ever. Always and forever an exercise of intelligibility in design, the new Carrera Dato features a few minor updates to enhance that effect; we didn’t simply want to reproduce the original watch with TAG Heuer, but also to move it forward. 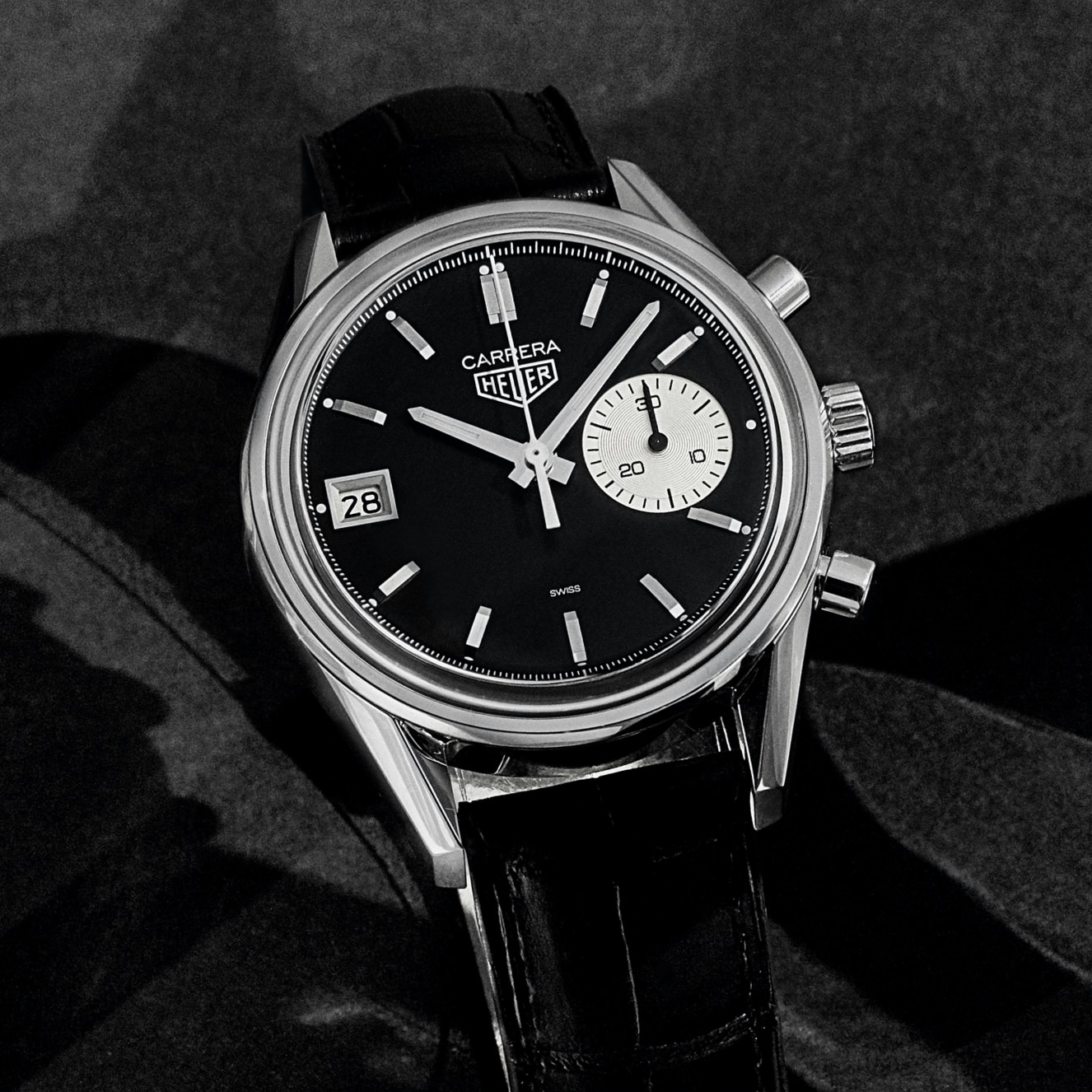 Vintage chronographs from the 1960s have long been a point of interest for in-the-know watch enthusiasts, and some of the most desirable are black-dialed examples from Heuer. An inky portal into the collector’s world, these models are typically distinguished by an N – for noir – at the end of their reference numbers and share a bold, saturated aesthetic that stands out against the more conservative look of chronographs with silver and white dials.

Vintage chronographs from the 1960s have long been a point of interest for in-the-know watch enthusiasts, and some of the most desirable are black-dialed examples from Heuer. An inky portal into the collector’s world, these models are typically distinguished by an N – for noir – at the end of their reference numbers and share a bold, saturated aesthetic that stands out against the more conservative look of chronographs with silver and white dials.

You’ll find absolutely no fauxtina on the new Carrera Dato’s dial. Its glossy black tone now purposefully extends out to the chapter ring, enveloping the entire dial in a consistent, compelling darkness. 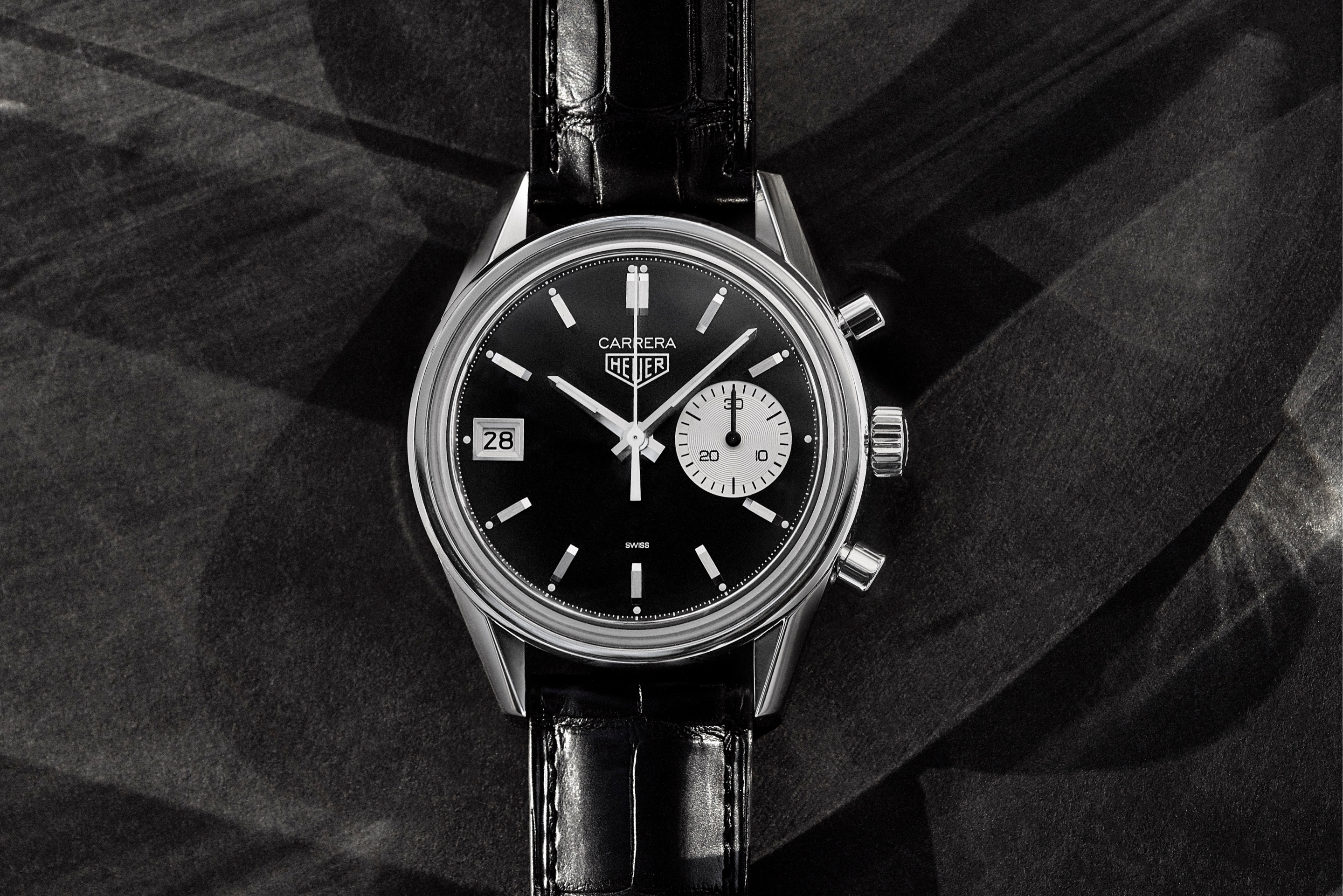 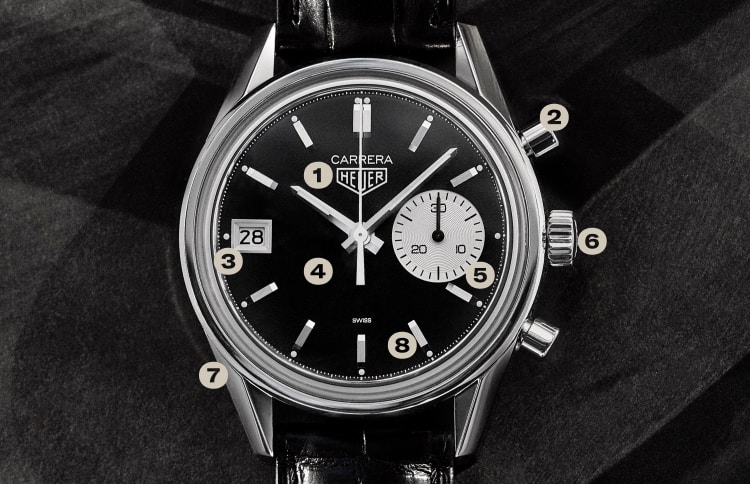 Yup – the Carrera Dato is the rare vintage watch where collectors welcome the once-a-day blink of a date window with open arms. We’d even go so far as to argue that the second-generation 3147N design seen here represents the ne plus ultra of complicated minimalism in watchmaking. When people say vintage watches just look better than their modern counterparts, this is the perfect example of why.

Think about it this way: If a conventional chronograph is trying to pitch you on the novelty of measuring elapsed time, the Carrera Dato is meant to assist your day-to-day life in the most practical ways possible. Are you more likely to time something that’s under 30 minutes – like, say, grilling a steak – or are you going to track an entire 12-hour experience?

A catalyst for a new generation of in-house watchmaking at TAG Heuer, the Calibre Heuer 02 is the brand’s latest-and-greatest chronograph achievement. It was developed in the 2010s from the ground-up by TAG Heuer, whose objective was to combine all the technical specifications one might desire in a 21st-century chronograph in a single flagship movement. 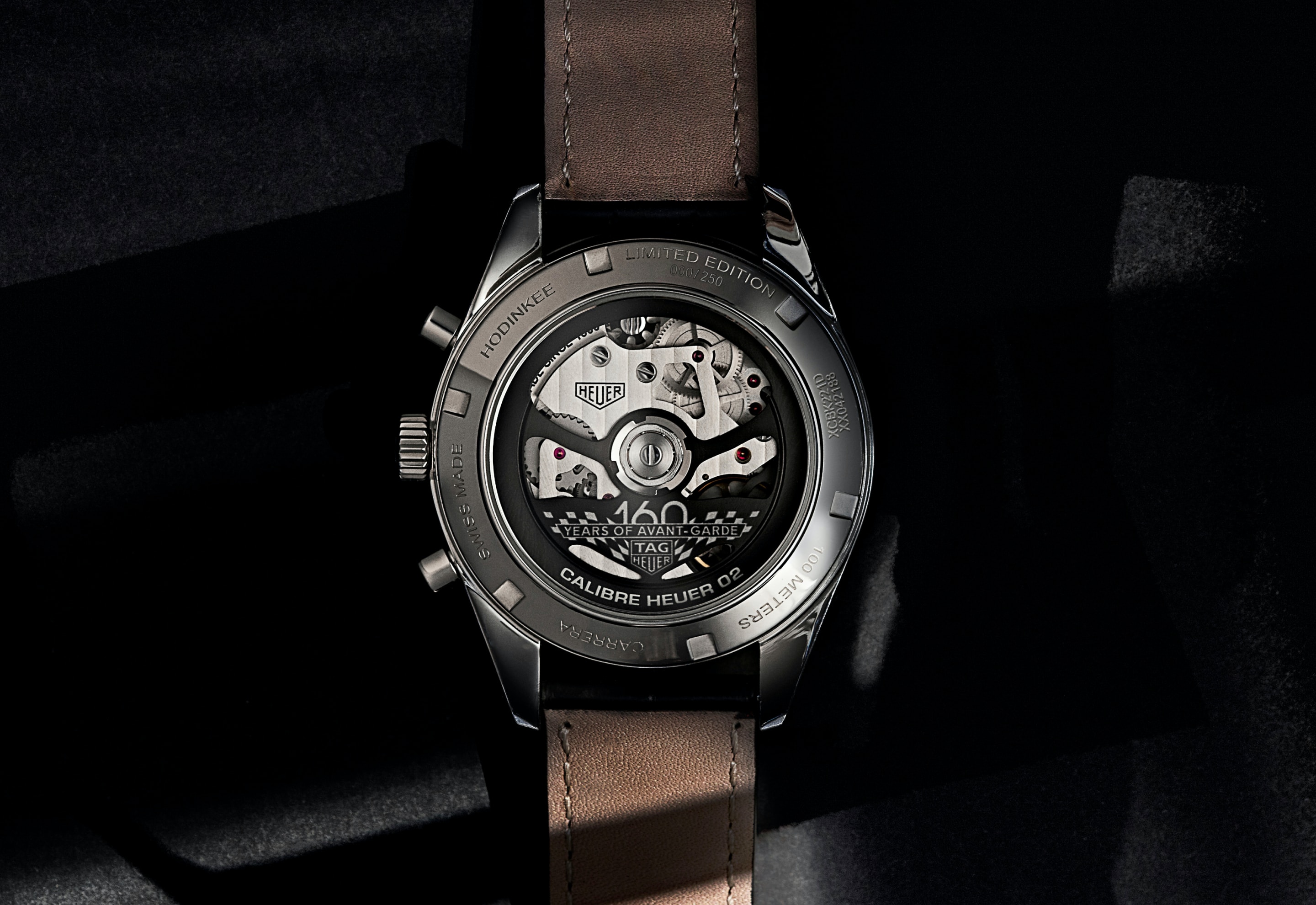 To recreate the unique dial layout of the original Dato, TAG Heuer removed the Calibre Heuer 02’s typical six and nine-o’clock sub-dials and developed a brand new date disc with a fresh font. It otherwise starts with a fully integrated design that runs in 33 jewels, at a beat rate of 28,800 vph, with an impressive power reserve of up to 80 hours, all stored in a single barrel. The Calibre Heuer 02 utilizes both a column-wheel and a vertical-clutch mechanism, a premium combination found in many of today’s top chronographs. Visible through a sapphire crystal exhibition caseback, the Calibre Heuer 02’s finish is simple but attractive, with crisp côtes de Genève across the mainplate and a blackened and open-worked rotor that commemorates the brand’s recent 160th anniversary. 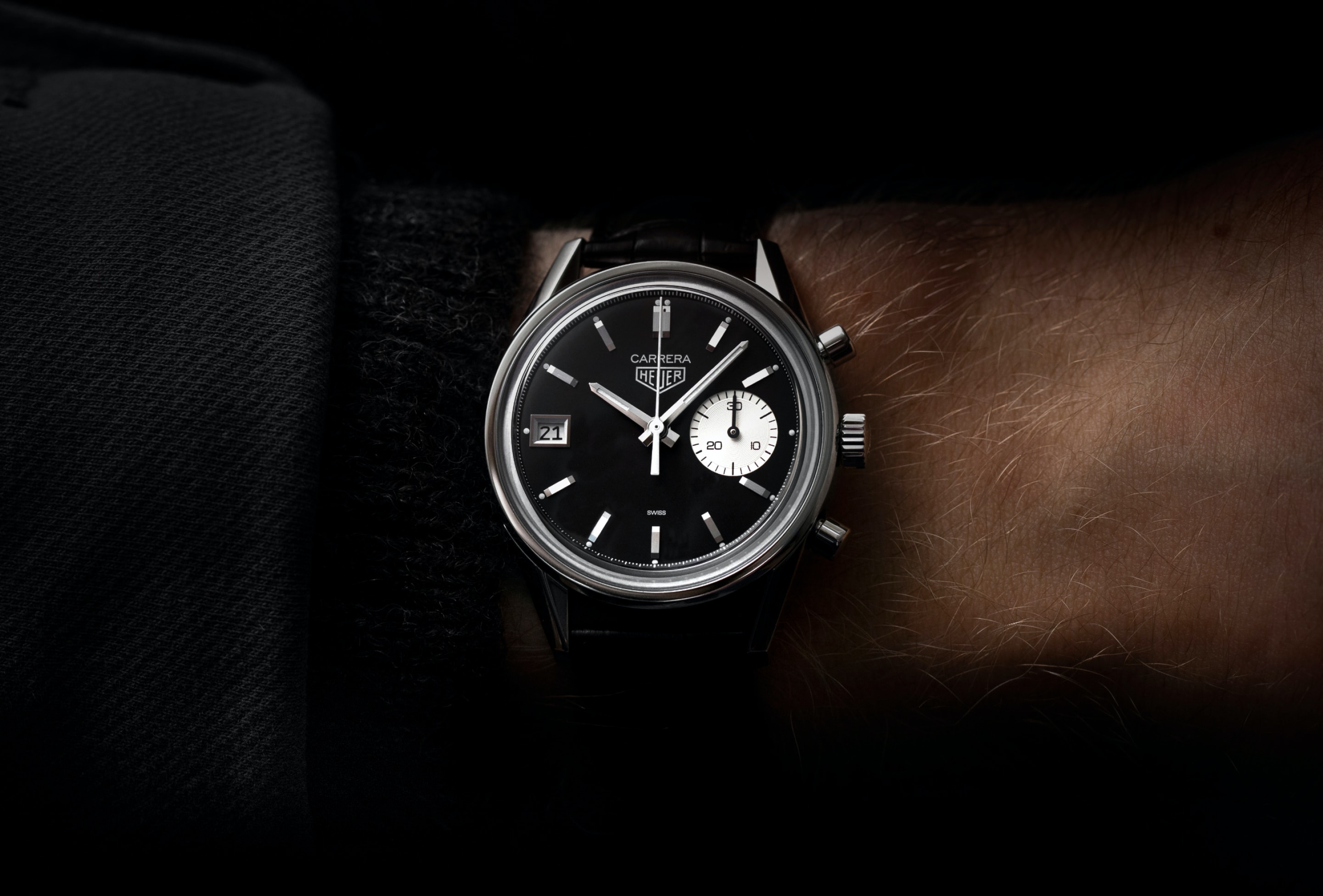 Our latest collaboration with TAG Heuer officially brings a favorite 1960s chronograph back to life, highlighting the company’s rich history and full range of contemporary abilities in the process. A limited edition of 250 numbered pieces priced at $7,250 each, the TAG Heuer Carrera Dato Limited Edition comes paired with a black alligator leather strap featuring a Heuer-signed deployant clasp. Half of the 250-piece run are available today with complimentary, worldwide delivery from the HODINKEE Shop, and the rest will be available at TAG Heuer brand boutiques in the United States and Japan.